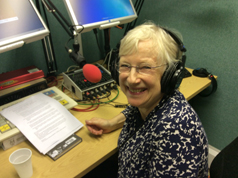 Ruth Binney (neé Chanter) spent her childhood in Tiverton where her father was a housemaster at Blundell’s School. Blundell’s School. She is now settled in Cardiff where she has a new garden to plan, plant and tend and is involved in a variety of writing and painting projects. Her latest book is Garden Wildlife on Trial, a sequel to the successful Weeds on Trial. She is also co-author, with football coach Rob Oyston of an exciting upcoming series for younger children combining storytelling with hints on improving their skills. Ruth continues to paint landscapes in acrylics and create collages and some of her work will be exhibited at Ilminster Arts Centre in July 2021. Since moving to Wales she is happy to be able to spend more time with her family, especially her grandchildren, and as well as gardening is also enjoying walking, reading and board games.

Following a full time publishing career in London, Ruth lived in West Stafford, just outside Dorchester with her late husband Donald for 10 years from 2002, and had five years that included extensive travel in South America and Europe, and enjoying live football, with her partner Andrew Fawcett until his death in 2019.

Ruth was educated at The Maynard School Exeter and Tiverton Grammar School from where she gained an Exhibition in 1962 to Girton College Cambridge to read Natural Sciences, studying Botany, Zoology and Physiology in Part 1 and Genetics in Part 2. She also won a swimming half blue. Her career in illustrated non-fiction publishing began at Thames and Hudson on The Explosion of Science and continued with publishers including Mitchell Beazley (where she was an editor of The Joy of Knowledge encyclopedia) and wrote for, edited and developed new partworks for Marshall Cavendish. She ended her full-time editorial career as Development Editor at Reader’s Digest Books. Since then she has written the collection of books displayed here, contributed to magazines such as Countryfile and The Countryman, given many talks and acted as publishing consultant.

Other career experience and highlights include:

Plus a wide variety of freelance editorial and writing assignments including work on:

Ruth is regularly interviewed on BBC local radio and has appeared on Radio 4’s Open Country.

In 2015  she has appeared twice on the Radio4 ‘PM’ programme, talking about the weather. Her prediction in May for a ‘mixed bag’, based on the progress of oak and ash trees turned out to be more accurate than those of the scientific broadcasters.

She regularly conducts book signings and gives talks to local associations on her books and on her life in publishing.

Now available in an audio version read by Ruth herself.

Ruth paints landscapes from both photographs and nature and is happy to take commissions. Click on the link below to find details of individual paintings.